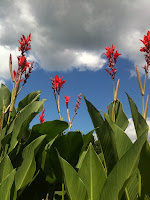 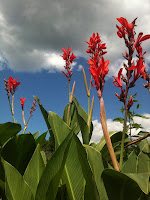 And then came the kicker. Steve told me that his mom told him about cooking and eating the roots as a cure for arthritis. Really? This rocked my world. I'm very excited at the prospect of cooking and eating some of my canna rhizomes. I was growing them for the WOW! factor of their height and beauty, plus their value to the hummers and then I found out that they might be native plants and THEN I found out-quite by accident-that they are truly edible. Quadrupal whammy!
Posted by Lynne at 8:44 PM