I just invented the most awesome recipe from a freshly picked bok choy given to me by my gardening friend, Ed. Ed has planted a lot of Chinese vegetables in his plot for his family to use, and when he gave me my bok choy he pointed out that they often make two different meals out of the same plant: soup from the stems and a stir fry from the leaves. I wasn't in the mood to make soup during these bright days of May, but my brain started thinking....I don't have to make soup, but I could still use two different recipes from the different parts of the plant. Oh-and he said to "toss" the flowers also since they are a delicacy. In a salad? I asked. No, to cook them. Of course, I don't have a wok or any other fancy cooking vessels. I just have a basic, stainless steel pan. I'm not brave enough to toss. After reading a few recipes, I decided to start chopping and make some decisions later. As I chopped, I mulled over what I had read and decided to plunder my supplies and start categorizing some ingredients into two camps: salady & sweet; nutty & meaty (I didn't have any meat, so think "hearty supper dish".) Here's what I came up with for Salady & Sweet: 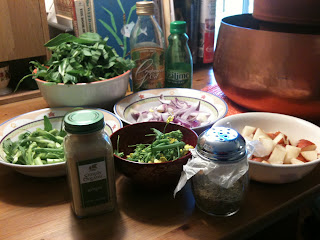 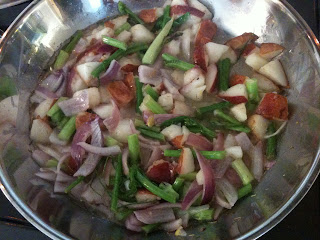 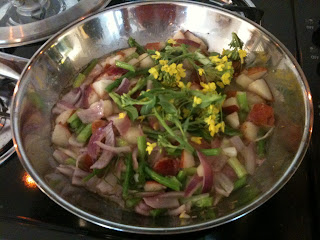 Then I covered it all with a lid and let it simmer while I washed the dishes. After everything was sizzling nicely and sending out nice smells, I added the greens by the handfuls and smooshed them down into the pan with the lid. After a several seconds, the greens reduced a bit and I was able to turn the leaves into the earlier ingredients (all nice and slurpy by now.) 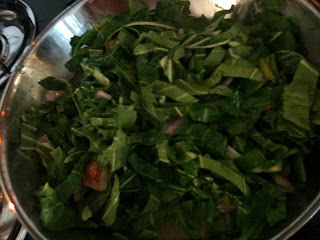 After about a minute, I turned off the heat and spooned the whole colorful and lovely melange into two bowls - one for me and one for the fridge! 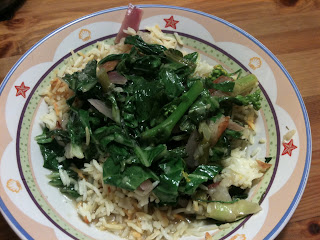 I dubbed myself a genius and moved on to the next challenge: Nutty & Meaty!
Posted by Lynne at 2:10 PM

The proprietor of this web site could also be} compensated to offer opinions on merchandise, providers, web sites and varied other subjects. Even though the proprietor of this web site receives compensation for our posts or commercials, we always give our sincere opinions, findings, beliefs, or experiences on those subjects or merchandise. The views and opinions expressed on this web site are purely the author. Any product declare, statistic, quote or other illustration about a services or products should be verified with the producer, supplier or celebration in query. We invite you to use our commenting platform to engage in insightful conversations about issues 점보카지노 in our neighborhood.