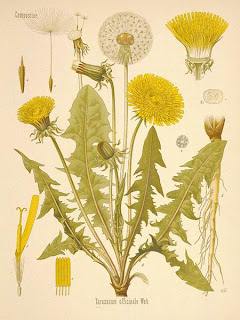 A few weeks ago, I dug up chicory and dandelions from the side of the road and planted them in my nursery bed. The chicory plants had gone to seed and almost immediately I found myriad baby chicories growing! I will transfer them to their own bed in the spring and I'm hoping that the bees will like them. And I will force myself to enjoy dandelion and chicory greens, even if I have to boil them two or three times to reduce the bitter taste.

I seeded my garden with Dutch clover this autumn. My community garden neighbors think it is a cover crop. It is not. It is a CROP! Bees like the little white Dutch clover better than the huge purple clover, which is too deep for their little "tongues" (do they actually use their tongues to gather nectar?)

OK-so I'm starting to hate The New York Times. Considering the fact that so many people still take this newspaper's word as gospel, I think they should be a little more careful about checking their sources. I am talking about their recent proclamation on October 6, 2010 that honey bee hive collapse is due to a combination of a virus and a fungus. The title of the article proudly proclaims, "Scientists and Soldiers Solve a Bee Mystery." No mention of PESTICIDES as a contributing factor, even though the bee scientists, led by Jerry Bromenshenk of the University of Montana in Missoula, state that more research is needed to determine "how much environmental factors like heat, cold or drought might play a role."

Two days later, a rebuttal article, "What a scientist didn't tell the New York Times about his study on bee deaths" was published on the Fortune magazine page over at CNN. It turns out that the study's lead author, Montana bee researcher Dr. Jerry Bromenshenk has a cozy FINANCIAL RELATIONSHIP with Bayer Crop Science, a subsidiary of the German pharmaceutical giant Bayer AG and the LEADING MANUFACTURER of pesticides, particularly so-called neonicotinoids, a class of neurotoxins that kills insects by attacking their nervous systems.

Kudos to journalist Katherine Eban for her fast work and fine article which reveals: "In recent years Bromenshenk has received a significant research grant from Bayer to study bee pollination. Indeed, before receiving the Bayer funding, Bromenshenk was lined up on the opposite side: He had signed on to serve as an expert witness for beekeepers who brought a class-action lawsuit against Bayer in 2003. He then dropped out and received the grant."

As for Kirk Johnson who wrote the original New York Times article, I pee pee on you. And many, many thanks to my friend Karen for alerting me to both of these articles.
Posted by Lynne at 3:19 PM

This is why I'm slowly turning my front "lawn" (i.e. weeds, really) into raised beds and rose bushes!
Cottage gardeners have it right, for sure.
Jennifer

...Jay doesn't use pesticides on his mini-farm, or anywhere on the property for all the usual reasons, but I didn't know about its affect on bees. Another good reason not to.

My 'lawn' is predominantly white clover and leave it bloom throughout early summer. Sure it looks shaggy. But it hums! :-D

At the state degree, taxes from casinos contributed over $27 million to public education, veterans applications, larger education scholarships and the compulsive gamblers fund. As casino attendance and revenue have steadily declined in Illinois the rationale that} regulation of video gambling terminals, the business in Missouri worries that legalization could trigger a similar response. Critics of the machines nonetheless say they've clearly caused a rise in 바카라사이트 drawback gambling within the state.